This lens, with a generic F-mount to E-mount adapter is around 500 grams. Over a pound. It’s big, too: 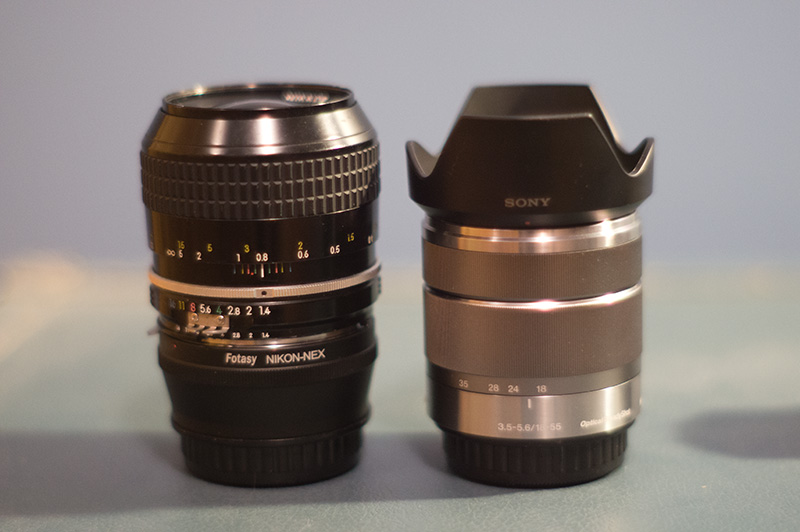 On my Nex-5n this combo is definitely front heavy. Not horrifically so (mostly because the Nex-5n is so small you have to have a good grip on the lens anyways). I’ve never held a Nex-7, but I imagine the 7’s bigger grip and heftier weight would make it a better partner.

The focus ring is smooth, but has more drag than my Nikon 24mm f/2 Ai-S. I’m not sure whether this is because Nikon slicked up the focusing ring for the Ai-S series or because this lens is older. Like the Nikkor 24/2 the aperture can only be adjusted in full stops.

As an aside, you may be wondering about the (non)Ai, Ai-S demarcations you see on older Nikon glass. Camera quest has a decent explanation of the differences. For alt-users (i.e., not using Nikon lenses on Nikon bodies), it doesn’t really matter whether you get a non(Ai) or a Ai-S lens. The differences between them mostly have to do with how much control the Nikon body has over the aperture. There are significant differences in price, though. Apples to apples, a Ai-S is worth more than an Ai and an Ai is worth a lot more than a non-Ai. Optically, Nikon usually keeps the formula the same as they updated the lens housing. So what I say for this lens should apply to the Ai-S and non(Ai).

Now for the sharpness/contrast/CA analysis. This lens is surprisingly sharp wide open, in the center, and maxes out somewhere around f2.8-4. Impressive. What isn’t impressive is how lousy the contrast is wide open. There’s a huge contrast improvement from f1.4 to f2. Still, as I’ll show you later, the low-contrast/veiling gives a beautiful rendition in some cases. Moving onto the corners: uber-fast lenses often have mediocre corners and this lens is not an exception. Even by f8 it’s not great. In the extreme corners (remember APS-C sensor, NOT full-frame), f1.4 has some detail and improves steadily to “OK” by f5.6. So if you are a hardcore landscape photographer, stay away. As for chromatic aberration, after f2, it’s easily controlled by Adobe Camera Raw’s built in tools (which I’ve used for these examples). Click on the image below to get the full 100% crops. 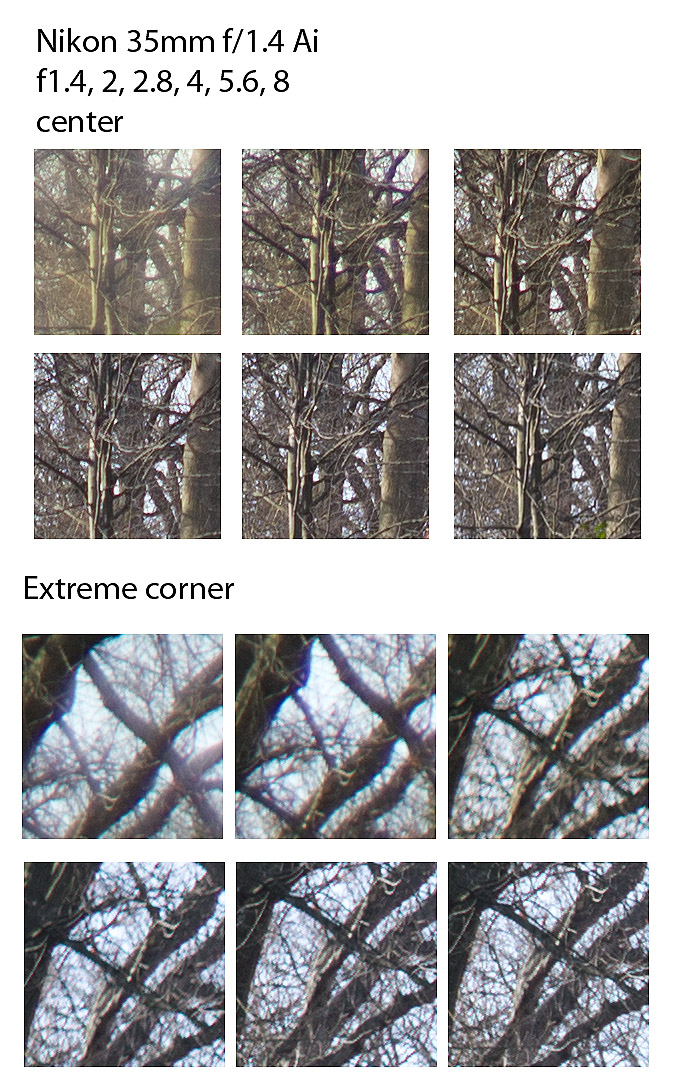 This lens, like the Nikon 24/2 I reviewed earlier, “veils” or “glows” wide apertures. Unfortunately this lens is more dreamy than the 24/2. I don’t have a direct comparison to show you, so just trust me. I can show you an example of the veiling and how it rapidly improves by stopping down from f1.4 to f2. 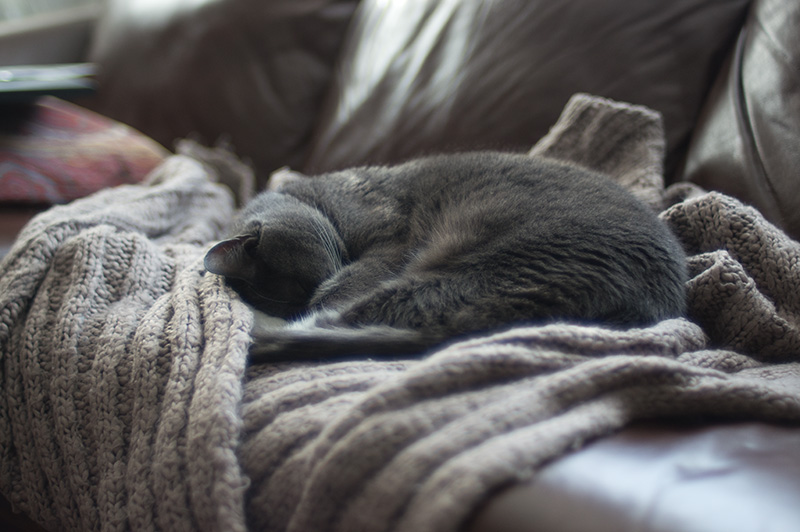 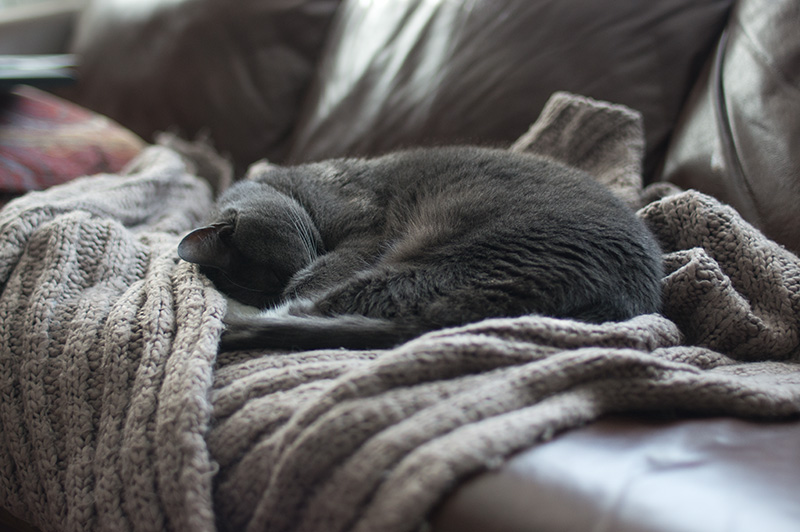 All of this ranting about soft corners and poor contrast may lead you to believe I don’t like this lens! Which isn’t true. The Pounder, when used with these limitations in mind can give wonderful results. It gives a creamy smooth bokeh: 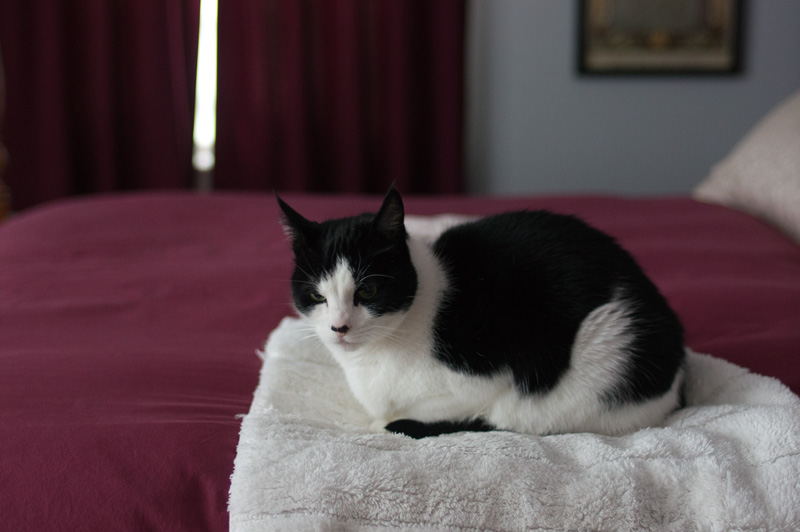 This lens is quite sharp wide open in the center. You can easily see out the bubbling paint in this 100% crop of a goal post: 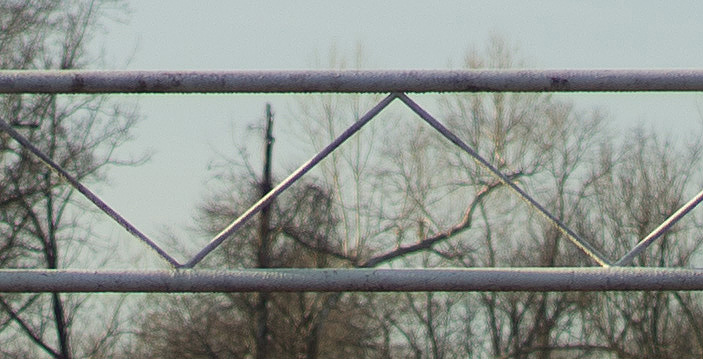 It can focus quite close (the lizard is about two-three inches long): 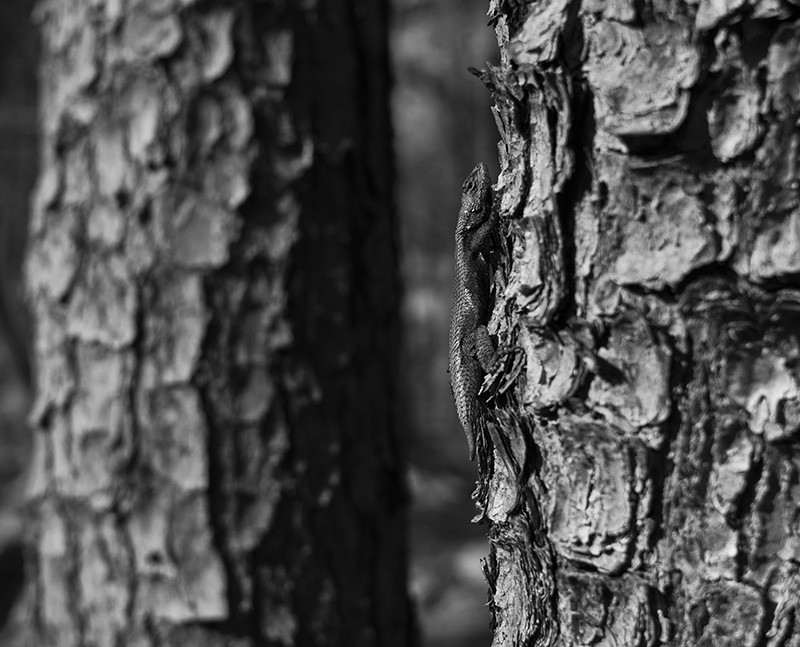 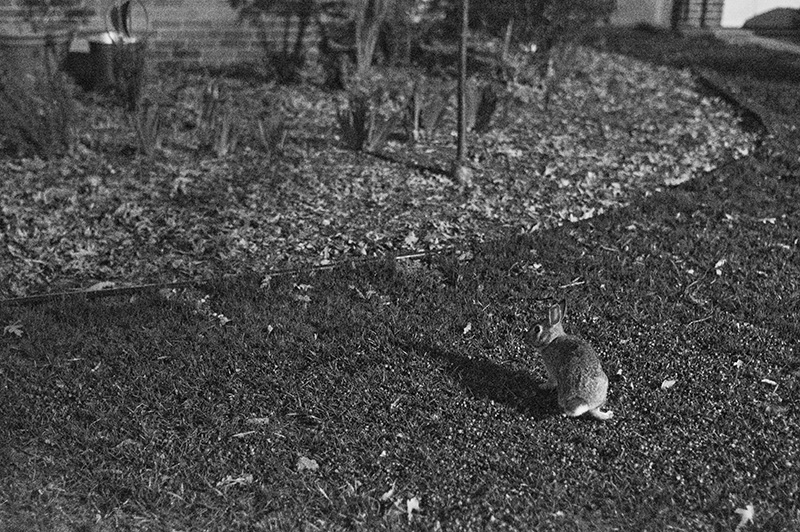 The lower-contrast and dreamy look gives a beautiful rendition to black and white converted images (f1.4): 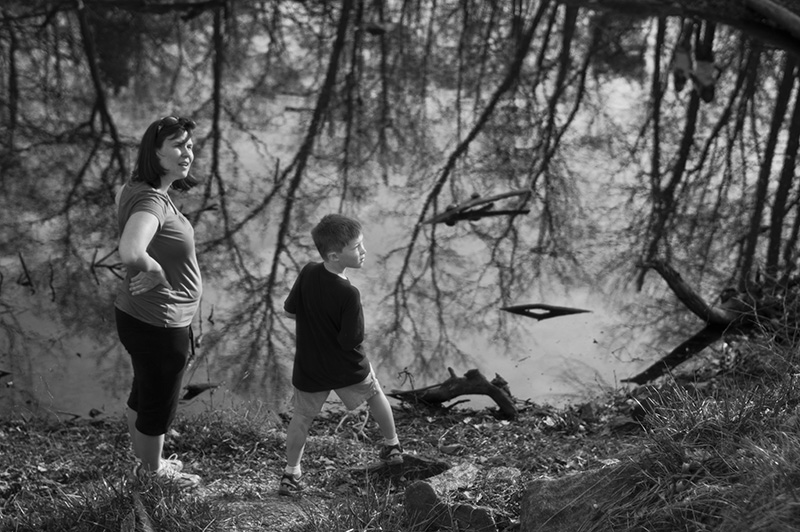 When you don’t want the dreamy look, you can just stop it down a bit: 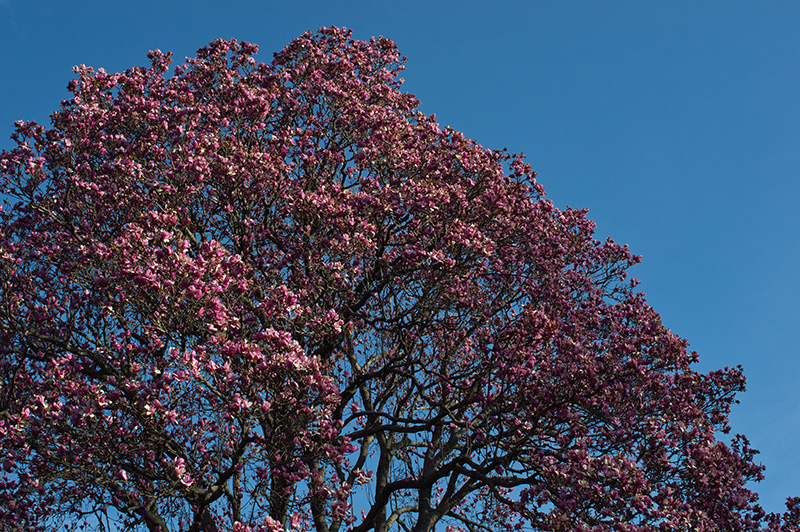 A big benefit of the f1.4 aperture is that the Nex focus peaking is quite precise. It’s easy to do the peaking at f1.4 and give a quick twist of the aperture ring before snapping the picture: 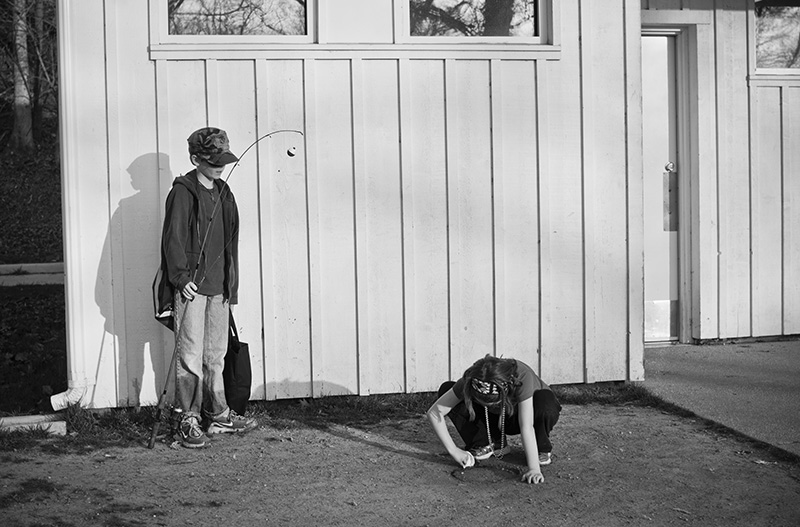 Bottom line: if you are willing to handle the heftiness of this lens, it’s very versatile – the speed and focal-length make this lens useful in all kinds of light.

A gratuitous picture (thanks for reading!): 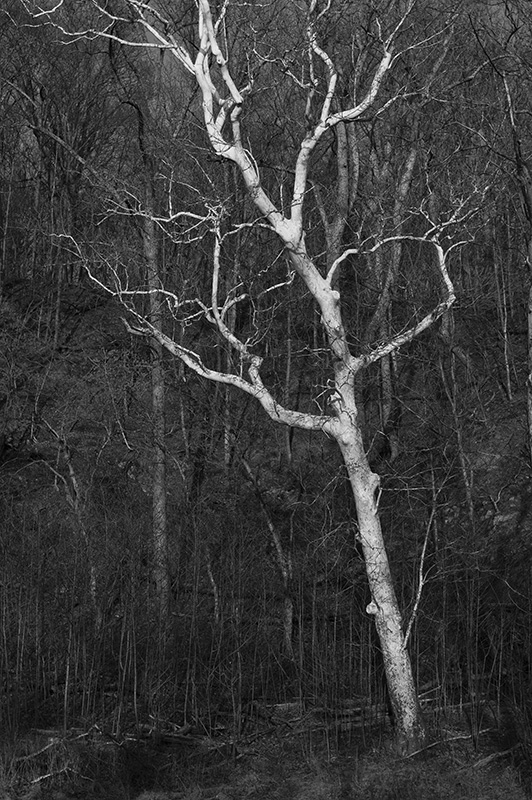