While in Massachusetts to attend Sam and Alli’s wedding we took a little time do some sight-seeing.

Friday night we saw some ads for the “BigE“, which apparently is the NE’s regional “state” fair. State fairs are always fun. Fried food. Amusement rides. Giant horses. Pigs. Parades. So of course we went. And, as expected, it was amusing. It’s a large fair, though not as agricultural as other fairs I’ve been to. Less farm animals and more state-specific advertising (each state has their own house where they promote their own uniqueness).

On Saturday Jaime spent some time in a yarn store while I wandered around Northampton.

After the wedding we spent about 24 hours in the Plymouth (home of the Pilgrims) area, checking out cranberry bogs. We learned quite a bit. Which wasn’t too hard because we knew NOTHING about cranberry bogs. Since the only pictures we’ve ever seen of bogs are flooded ponds covered in little red fruit, we half-way expected cranberrys to be grown in underwater. Not true. They are grown on dry(ish) land. They can be harvested on dry land, though it’s rather time consuming. This is done for cranberry’s that are to be sold whole. An easier method is to flood the bog. A big machine goes around whacking the plant, releasing the cranberry’s which float to the surface and are easy to collect. The downside is that the berries get more abuse during the process – so these berries are used in food or liquid products.

Anyways, what follows is a photo of a cranberry bog. It’s also the entry point for the Massachusett’s galleries. 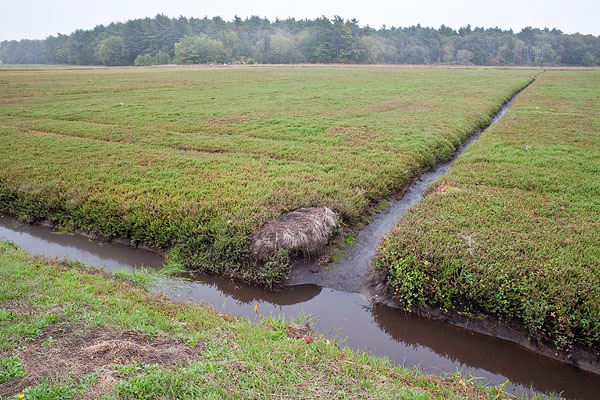